Copy the growth strategy used by Sam Parr and The Bachelor. 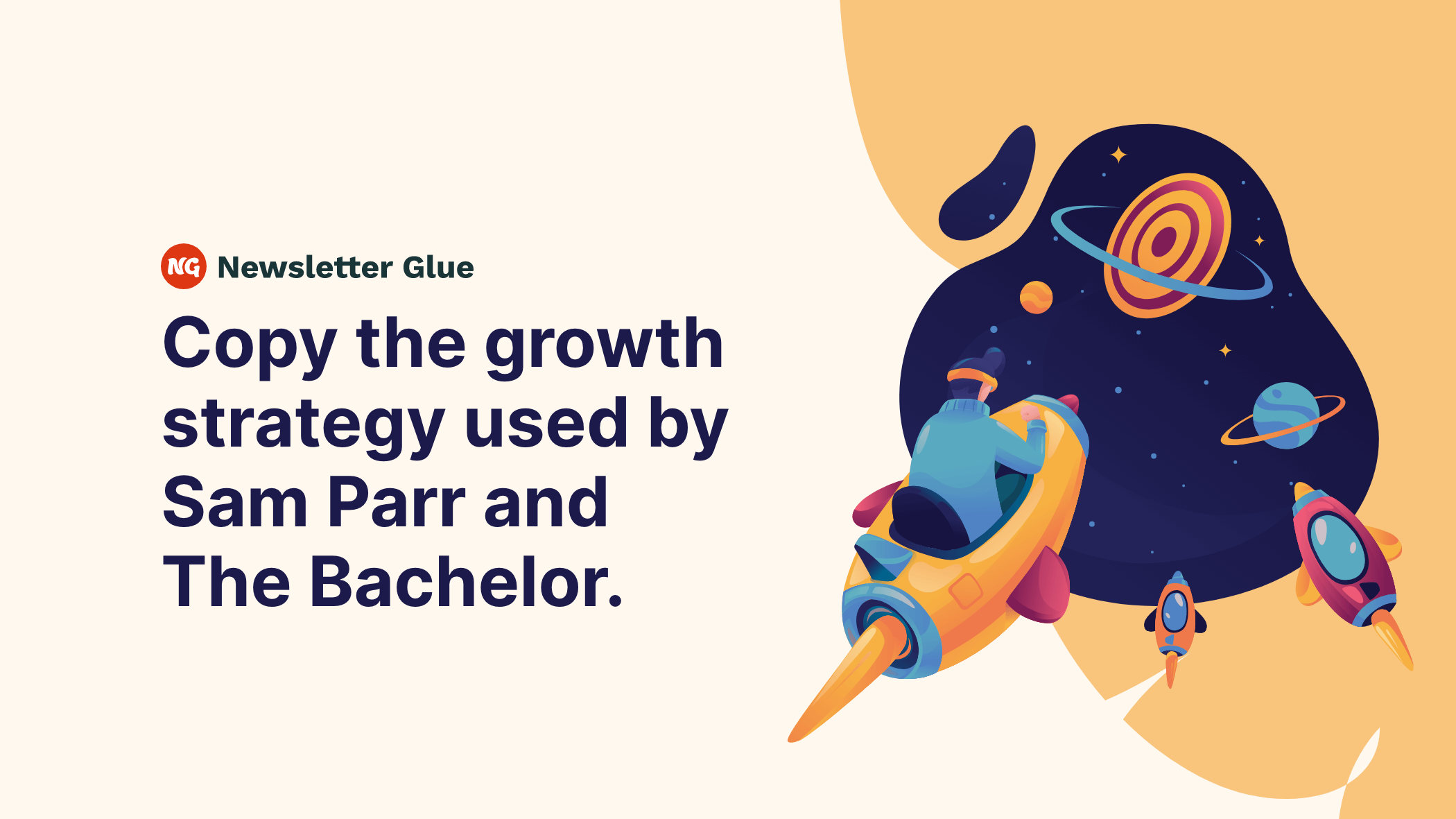 What common strategy does a top business newsletter and long-running reality TV show have?

Once they find the winning formula, they replicate it with multiple spin-offs that grow the main brand. That’s how The Hustle and The Bachelor keep growing, reaching new markets and audiences.

Speaking to Rob Walling from Startups for the Rest of Us, Sam Parr suggests a great way to grow The Hustle is by creating multiple newsletters using the same formula that worked so well for his first.

He explains, “…you have one major list that has 3 million people and then you have a handful of smaller lists that are in similar but different targets. Collectively your list should be like 5 million people.”

From here, he believes there’s “clearly a path to 100 million in revenue, I think, with these styles of businesses.”

To illustrate just how to achieve this, he explains that “In order to build a $100 million dollar business… you can easily get to $40 or 50 million a year in sales, through advertising sales. The way to do that, he says, is to charge around $35 to $40 per 1,000 sends.”

Well, not really… But let’s switch gears for a second and dive into the world of reality TV.

Reality TV uses this formula all the time. Once I point it out, you’ll start seeing it everywhere.

For this post, we’re going to focus on The Bachelor. You know, the show that SO many people claim to hate, yet which keeps coming back season after season due to the massive number of people that tune in to watch every episode. Someone’s not being entirely honest…

The show is clearly a hit. They’ve found a winning formula that works for their viewers. However, at some point, they’ll run out of people who want to watch an eligible bachelor give roses to potential partners.

When that happens, they reach market saturation and their viewership numbers will slow, then decrease over time.

But, remember that formula trick? Yup! Instead of putting all their eggs in one bachelor basket, they spun off an entirely new (but here’s the important part: similar and related, sharing a winning formula) series: The Bachelorette.

Same setup, but with the gender roles reversed.

Now, they’ve opened up a whole new potential audience: not only those who may prefer watching just The Bachelorette on its own, but ALSO many of those already watching the original, The Bachelor.

To take this even further, the New York Times (possible paywall) reports The Bachelor now has 37 versions of the show across the world!

How’s that for replicating a formula that works?

Now, let’s head back to the world of newsletters and see some examples from there:

Unfortunately, since Sam was just talking on a podcast about what he would do in theory, and since The Hustle sold to Hubspot and he’s no longer CEO, we might never get to see his Hustle growth strategy implemented.

Fortunately, we’ve found other newsletter publishers who have built multi-million-dollar businesses using similar strategies. These include:

Morning Brew is a very well-known business newsletter, and its parent company was valued at approximately $75m when the Insider group acquired a majority stake back in 2020. The company reportedly generated $20m in revenues in 2020. Morning Brew was their first newsletter and it did REALLY well, but they replicated their formula and added multiple newsletters sent out to a claimed combined readership of 3.5m as of 2021. Titles of these newsletters include not just Morning Brew, but also:

They all generally follow a similar formula, with each focusing a little more specifically on its main topic.

Time Out started in London back in the late 1960s, producing local city info about urban cultures. Now it has grown into a global media and hospitality business with a staggering number of newsletters as one of its offerings. Here the idea of following a formula is perfectly illustrated: create a newsletter for a popular city. Then repeat that for a different major city. And another. And another. Each newsletter has a similar setup and style as the others but is regionally focused. London? Check. Paris? Yup. San Francisco? Definitely.

MIT Technology Review is not only a magazine but also has multiple popular technology newsletters (among other offerings). These include:

As before, the company offers multiple individual newsletters, but all generally following a similarly successful theme. In MIT Technology Review’s case, that’s technology.

Nail down your winning content formula (more on this in the next section), then repeat this formula across different interest groups.

This is especially handy when you cover a general or broad topic, say for example, business or technology. You are then able to specialise with different yet related newsletters, each one going more into detail on its topic.

Let me give you an example: Let’s say you run a successful newsletter focusing on triathlons. If the original newsletter does well, you could branch out into one about running specifically, another about cycling and a third about swimming.

Each one will hopefully find a core audience, with those who like to combine these sports (triathlon!) likely signing up for more than a single newsletter. One triathlon-loving reader = the possibility of four subscriptions from a single person.

Throw in a spot of cross-promotion in your various newsletters, and you’ve suddenly got some real growth potential.

Fortunately for you, you don’t have to wait till you have a million subscribers to implement this. You can do something similar once you have 500 subscribers.

How to figure out your winning formula

Ask your readers what they like about your current newsletter. You could try something like “what makes you open this newsletter every week?” or “how would you describe this newsletter when sharing it with a friend?”

Subscribers chose to subscribe to your newsletter, so those who answer will likely be offering key, honest feedback that really should be taken seriously.

Whether they say it’s your honest tone of voice, in depth insights, or something else entirely, be sure to replicate that in your next newsletter.

Figure out your formula

Let’s say you write a local newsletter on new restaurants in the area. To distil it into a formula, that’s:

Now, you have to figure out whether geography is the thing that makes your newsletter special or if it’s the variable (aka the thing you can plug and play).

For example, if people like that your newsletter is super specific and written through the eyes of a local, then that’s probably what makes it special. And so `topic` is the plug and play variable.

So rather than creating a range of newsletters like:

You instead want to create a range of newsletters like:

Experiment! It might not be immediately obvious which element is the special sauce and which is the variable. So making mistakes is a key part of the process.

Tips for launching your offshoot newsletter

Once you’ve found your winning formula, it’s time to copy and paste it. Don’t reinvent the wheel.

Here are some tips for launching your new newsletter:

Should you ask permission before adding your existing subscribers to your new newsletter? The answer? It depends. There are many ways to handle this and it all depends on the engagement of your subscribers and the size of your list.

The same same but different strategy

One option is to send your new newsletter to your existing list, but keep everything soo similar-looking, that it just feels like a new topic, rather than a new newsletter.

Then, give prominent opt-out options in your newsletter so those who aren’t interested will easily be able to opt-out.

If you want to be extra cautious, you can make it opt-in, instead.

If you have a giant list and are worried about affecting your deliverability, or if you’re just not sure how much overlap there is between your current and new newsletters… Simply advertise your new newsletter just like you would a sponsored post.

Maybe create a whole write-up around why you’re starting a new newsletter, then end by getting people to visit the new newsletter landing page to subscriber.

Segment out your subscribers and run tests

If your list is big enough, you can actually try both methods. Just segment out a small portion of your subscriber list and run tests to see which one works better for you. Once you’ve locked in your preferred process, send it to the rest of your subscribers.

If your list isn’t big enough, you’re better off applying the “Same same but different” strategy. Smaller audiences tend to be more intimate which makes them more forgiving and engaged.

Our experience with offshoot newsletters

In our experience, we ran the “Same same but different” strategy. Our newsletter list is small and we made sure to make the opt-out link prominent.

As a result, we added most of our subscribers to the new list, and even received some supportive emails congratulating us for launching new newsletter projects!

One of the trickiest aspects of multiple newsletters is you’ll likely need a team to manage everything that’s going on. However, managing a team of writers and editors and streamlining their publishing process can be difficult. Adding to the difficulty, most email builders are not set up for multiple users…

Newsletter Glue can help you out quite a lot here by streamlining your workflow. Newsletter Glue customer, WBUR, has multiple daily and events newsletters they send to 100,000 subscribers in total. Their team of writers and editors can easily collaborate inside of WordPress (because WordPress makes multi-user collaboration easy) on each individual newsletter. This in turn makes editing and approvals much easier.

As a result, the time and effort they used to spend trying to get something approved, and wrangling code and building emails, is now better spent on improving the quality of their content.

As Sam Parr said in his podcast interview, it’s hard to grow a single list to become really, really big, because sometimes the market just isn’t big enough. By appealing to multiple different adjacent markets, you’re able to grow and cross-promote lists and create a publishing empire. While you’re at it, Newsletter Glue will be right there to help you do so.

Build and publish newsletters in WordPress with Newsletter Glue

Ready to halve your publishing time and double your reach with Newsletter Glue?

Please log in again. The login page will open in a new tab. After logging in you can close it and return to this page.

Here's how it works:

1. Enter your email to start.

2. A fresh new WordPress demo site is created for you.

3. You'll be taken straight to the WordPress admin.

What to expect from your demo:

You're seconds away from trying Newsletter Glue for free... Get started now!